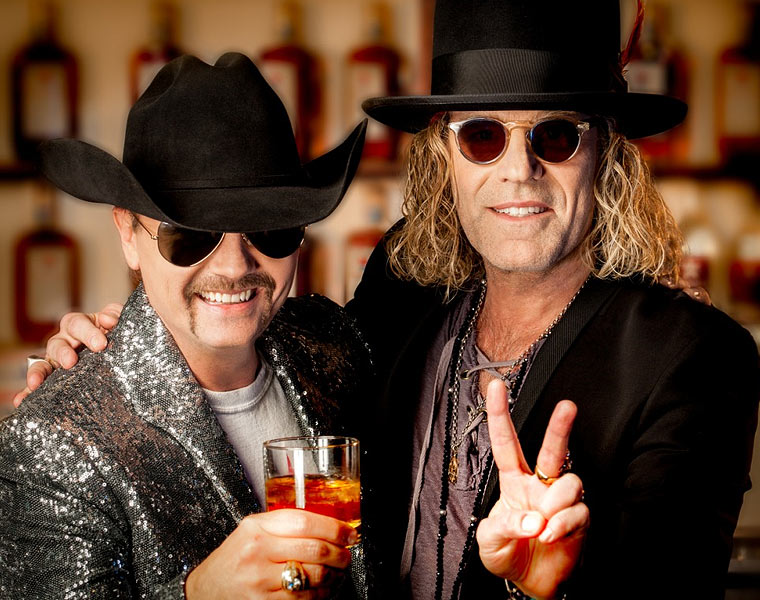 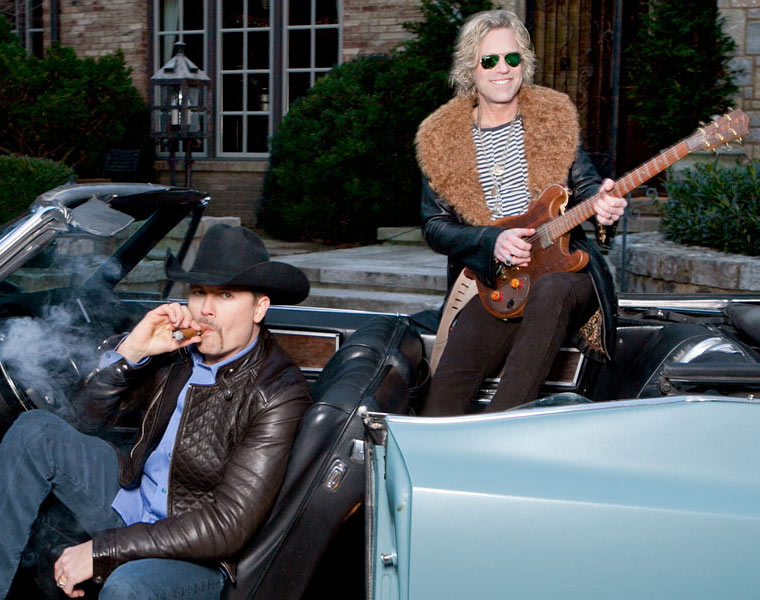 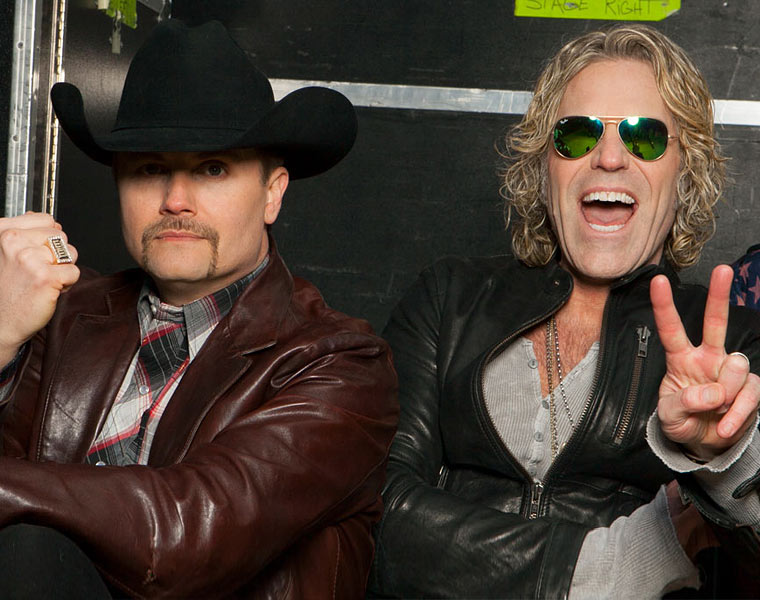 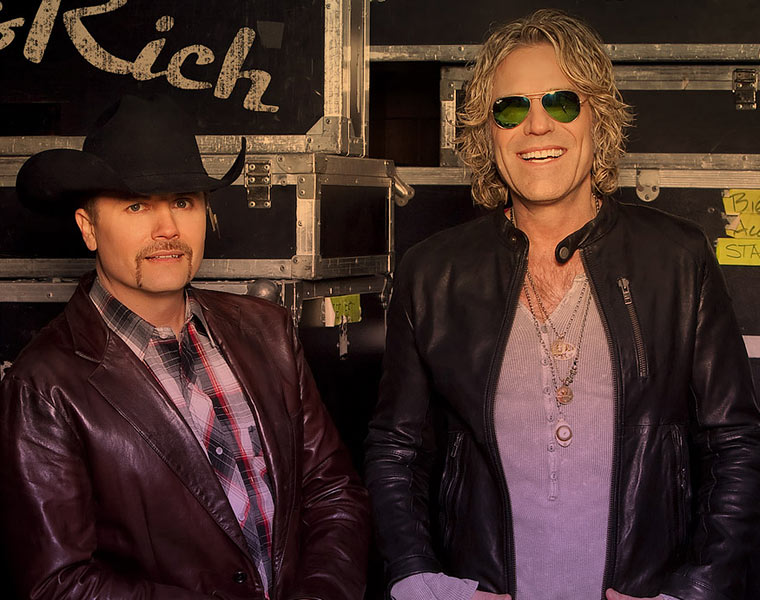 A band, a brand, a bond and a brotherhood: Big Kenny Alphin and John Rich –Big & Rich – have blazed an indelible mark on modern country music, not simply by breakingtherules, but by setting them on fire. Big & Rich have captivateda multi-generational community of listeners with their sterling songcraft and recorded performances.

Now a decade and a half into a storied career they tour the country for over 100+ dates annually, presenting electrifying concert spectacles of ceaseless energy and outrageous personality.Very notably, the pair calls the shots with ownership of their master recordings and music publishing rights through Big & Rich Recordsin partnerships with Thirty Tigers / The Orchardand Kobalt.

Additionally, both contribute generously as philanthropists and flourish as lifestyle entrepreneurs.2019 will see the band hitting the road for the “Redneck Riviera Whiskey Presents” Big & Rich’s ” Peace, Love &Happy Hour Tour,” the latest outing by two very separate individuals who in many ways, might seem polar opposites. John is driven and intense, while Kenny’s motto of “Love Everybody” exemplifies his idealistic philosophy. “I think Kenny and I are a great representation of how Americans should be in general,” says John. “We disagree on a lot of things. But the things we agree on override our disagreements. We have a drink and get back on stage and it’s all good.” Big Kenny concurs with this assessment. “I think we both bring a balance to each other, no matter what the situation is.

That’s what makes relationships good, when you have that dynamic.”Big & Rich inked with Warner Bros Records. From their 2004 debut, the triple platinum Horse of a Different Color and their hit “Save a Horse, Ride A Cowboy,” the duo evolved into one of country music’s most auspicious partnerships. The song “Rollin’ (The Ballad of Big & Rich), laid down the law with prophetic lines, “Country boys don’t rock and roll/Yeah the record man told me so.” Clearly, this record man was wrong. Garnering multiple Grammy, ACM, CMA and CMT Music Award nominations, subsequent best-selling collections include Comin’ to Your City, Between Raising Hell and Amazing Grace, Hillbilly Jedi, Gravity –which delivered three consecutive Top 10 hits –and their most recent collection, Did It For The Party, that debuted at Number One on the sales charts.Trademarking the phrase “Redneck Riviera,” John Rich founded a club with the name in downtown Nashville; launched a line of boots available in all 50 states; began a partnership to manufacture and distribute beef jerky and nowhas a line of whiskey in stores coast to coast. “Work Hard, Play Hard” is the company’s motto. “It’s basically an extension of my personality, which is pro-work ethic, pro-American, pro-veteran and pro-active duty,” John says. 10 percent of the profitsfrom every bottle sold are donated to the veterans’ organization, Folds of Honor. Last year alone, Redneck Riviera Whiskey paid for 37 college grants for family members of American military killed or disabled in the line of duty.Big Kenny Alphin is a founding partner in The Deadwood Mountain Grand, recognized by Forbes magazine as the number one luxury resort in the state of South Dakota. The hotel, casino and 2,500-seat performance venue are located in Deadwood, the first town where Kenny and John played together with the name “Big & Rich” on the ticket.

Here they met local resident Niles Harris, a Vietnam veteran whose story inspired their signature song “8th of November.” Big Kenny,long known as ” The Universal Ambassador of Love ” is currentlyrolling outhis own line of lifestyle brands called”Peace, Love & Happy Hour”& “Pub of Love,” where his mottois “CelebrateThe Good Times.” Sales will support his “Love Everybody Foundation”, an umbrella organization for causesclose to his heart includingsupporting veterans and first responders, creating backpack programs for kidshere in the U.S.and providing ongoing aid for children in need worldwide.Big & Rich were honored with the 2016 CRS Artist Humanitarian Award for their support of a spectrum of humanitarian efforts, from visiting individual patients in hospitals, to staging benefit concerts for the Country Music Hall of Fame and the 173rd Airborne Memorial, to their well-documented U.S. and international outreach. The duo has made a point of helping underprivileged children and familiesat home andabroad in struggling countries like Uganda, Sudan, Haiti and Kenya, among others. St. Jude Children’s Hospital, The T.J. Martell Foundation, Vanderbilt Children’s Hospital, National Coalition Against Domestic Violence, the 173rd Airborne Memorial Fund, Clean Water,the Special OlympicsandSecond Harvest Food Bank are just a few of their worthy causes.When they first joined forces, John Rich originally from Amarillo, TX, had been a vocalist and bassist for the band Lonestar, was collaborating on songs with other Nashville artists, and envisioning a solo career. Kenny Alphin, from Culpeper, VA, was also a solo artist and writer signed to his first major record deal at Hollywood Records. John, Kenny and their friends created a loose community of artists known as MuzikMafia.

This collective of marginalized Music City musicians gave birth to a powerful movement of diversity and inclusion. Within three years, a number of these artists had signed major label deals, including Gretchen Wilson who emerged as a vital new voice with chart hits “Here for the Party,” co-written with John and Kenny, and “Redneck Woman,” her collaboration with John Rich.Over the past 12 years, their signature anthem “Comin’ to Your City,” has fired up football fans as the theme song for ESPN College Game Day. The band has expanded their presence immeasurably through music videos and television appearances, including John Rich’s victorious stint as the winner of Celebrity Apprentice when he raised $1.2 million dollars for St. Jude Children’s Research Hospital.With separate and combined enterprises, causes, and concerns, Big & Rich envisions these endeavors as extensions of the music. Notes John Rich, “In the pursuit of the American Dream, if you want something, think hard, work hard, and go after it. There’s no guarantee you’re going to get it, but the fact you’re allowed to pursue it is where you should find your happiness.” Says Big Kenny, “I want to be a fun and entertaining positive voice and entity in my community, in mycountry, and in the world. I hope people know that those are the things that are important to me. And when they leave a Big & Rich concert, they should feel like they’ve just witnessed the greatest show on earth.”

NO REFUNDS. NO EXCHANGES. EVENT DATE, TIME AND ARTISTS SUBJECT TO CHANGE.